Yesterday as many of you would have seen, I posted about getting the 4K Skywalker Saga Limited Edition disc set which is a big deal for me. Firstly, the amount of money I spent went far beyond what I’ve spent on Star Wars merchandise before and secondly, it’s the first “limited edition” piece of merchandise I’ve owned thus far.

So my partner and I went through the box set looking at all the discs and the artwork and then my partner said: “oh my god, it’s a letter from Luke Skywalker!” Well, as you can imagine, my heart started to thump quite hard with excitement. And there it was, a letter from none other than Mark Hamill himself talking about the Force, the journey he has experienced and his thanks and gratitude to the fans.

Here’s a photo I took of the box set before I opened it: 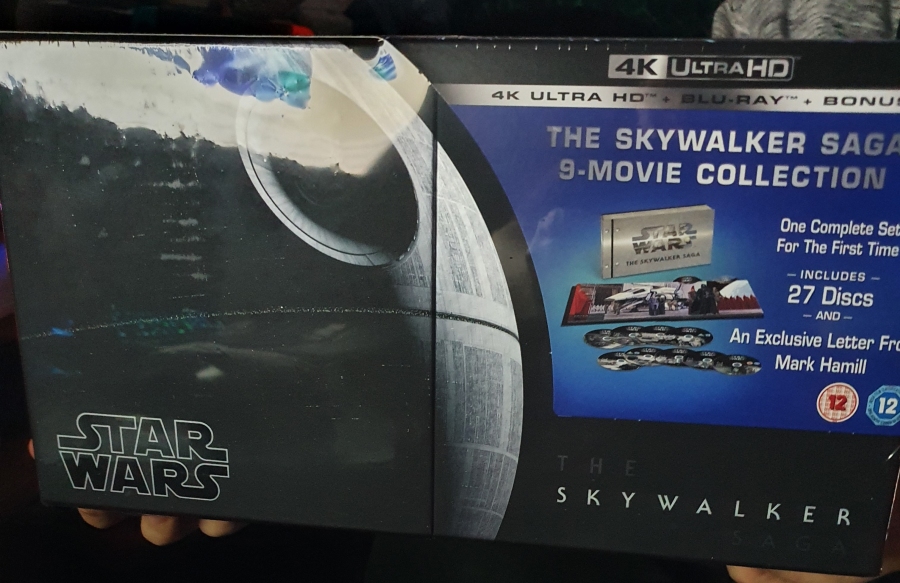 It’s going to take me some time to get through all the extra stuff that’s included on the discs. For each movie, there is a 4K UHD version and a Blu-Ray 1080p version. That’s 18 discs in total. The remaining nine discs are packed with behind the scenes footage and extras which some people may have seen on previous releases. As I have not previously owned a complete set of discs for Star Wars, this is something that was needed as much as wanted. It wasn’t just a vanity purchase for the sake of owning it (although there is absolutely nothing wrong with buying things because you want them).

As I have never featured any of the extra footage or material on my blog before, I will be blogging about that content as I work my way through the discs.

And next to the letter from Mark Hamill, I discovered that the 1080p version of The Last Jedi also has the extremely rare “score only” cut of The Last Jedi. I have been trying to source this since it released but living in New Zealand, I was never able to find it anywhere online. And now it is mine! I am one very happy Star Wars fan 🙂

There will be more of this to come my friends, but for now, thank you for reading and I’ll catch you in the next post.

2 thoughts on “The Score Only Cut of the Last Jedi Is Now Mine!”

Luke going to the dark side and killing Yoda?! Interesting concept - what do you think about this? ⁠
🎨Image via iamraypark🎨 So what do you all think? Is Ray Park getting ready for Kenobi in these shots from his IG? One of the locations is listed as Pinewood Studios - isn't that where the production of Kenobi is currently located? IF SO I CANNOT WAIT omgosh. Sorry if this is a spoiler to anyone ahead of time but I post spoilers so yeah 😁⁠
Luke Skywalker - The Original Hero 🥰😍⁠
Amazing Anakin 🎨art by @a.ross.art🎨 What kind of flashbacks do you think we'll see if any of Anakin in the Kenobi series? So excited for it!⁠
Edit by @starwarsedited. I think these two need a better duel - what do you think?⁠
Amazing 🎨art by @bosslogic🎨 - dude, your work is so inspiring. Thank you ♥️🥰⁠