This post is both a small self-plug (sorry but it’s relevant, you’ll see) and promotion for Pinterest because so many people overlook Pinterest as a viable social media tool.

After taking note of my increase in traffic recently, I wanted to see where the majority of my traffic is coming from. A massive chunk of it is from WordPress Reader, but an equally huge piece of it is from Pinterest.

Here is an example of an image I posted a few weeks ago: 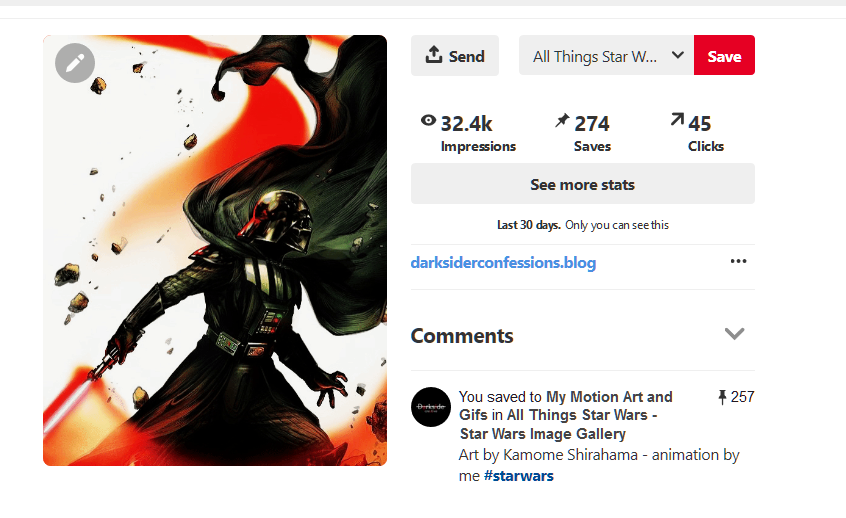 And the beauty of this is that I don’t have all that many followers either and honestly, you don’t really need them, not in the same way that you do for other social media tools. The only thing I started to do differently on Pinterest to generate traffic was to make my own content and to use what is called “Rich” pins (which is merely a pin that has a link back to a blog or website). That’s it. Of course, having millions of people repinning your images and articles helps (of course!) but I only have a few hundred followers on Pinterest. My point is, if your content is worthy of looking at or reading or viewing, you’ll generate traffic without really doing a whole lot more. Who doesn’t want more traffic? And it’s FREE!

On average, 250 million people use Pinterest to find content and promote their own content. That’s A LOT of potential eyeballs on your work/images/products. You may not care for this or views or followers and that’s cool too. I didn’t, to begin with. My primary goal was to find Star Wars content and art as a fan, and then it grew into an understanding of how specific types of content can get more people interested in what you do or offer. If I were trying to market something, Pinterest would be my first stop, even before Twitter or Instagram (although both of these social media tools are equally as powerful when used the right way).

I’m not a social media guru (haha that very word makes me want to giggle), and 32 thousand views are nothing compared to some of the more significant accounts on Pinterest. But I’m still averaging around 400k unique viewers a month, and the only thing I do is create my own content when I have time and blog on a regular basis.

Are you willing to give Pinterest a go? Let me know if you do, we can be Pinterest mutuals 😀 Good luck and happy pinning!